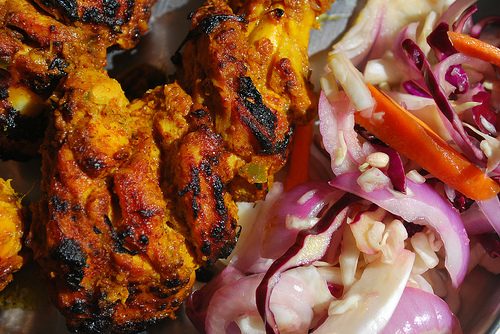 Mughlai is a true fusion cuisine, reflecting Pakistan’s vast cultural and ethnic diversity. Mughlai cuisine really varies across Pakistani regions and even from household to household.

However, unlike in Bengali cuisine, seafood is generally not consumed in large amounts in Pakistan apart from in the coastal areas of Sindh and the Makran coast of Balochistan. And in Pakistan, meat accounts for as much as three times more than in the typical Indian diet. Goat, mutton, beef and chicken are usually chopped into small cubes, spiced and either stewed or used for kebab dishes.

The Eastern provinces of Sindh and Punjab particularly serve highly seasoned, spicy dishes. The extra richness and flavour is traditionally achieved with the use of whole spices, which stay fresher for longer. 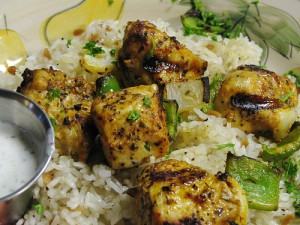 One very popular dish in Pakistan is also now quite well known in the UK. It is comprised of baked rice layered with meat and its name is biryani. In Pakistan, biryani has its own regional varieties such as Lahori (rich with spices, ginger and garlic and sometimes served with Persian prunes or “aloo bukhara”) and Sindhi biryani (with green mint, chiliies and coriander). A vegetarian form of biryani, Tahiri, is also popular and the Joy Raj Special Biryani shares some similarities with this dish.

Traditionally, a small piece of naan or Doday — Pashtun flat bread cooked in the vertical clay ovens called tandoor — bread is torn off and used to scoop and hold small portions of this rice and meat dish. Pickles of lemon, mangoes, carrots etc. are commonly used to bring further flavour to the food.

Especially popular in the capital Lahore is another traditional Pakistani favourite, lamb or chicken Karahi. Particularly delicious served with a side dish of silky garlic spinach, Karahi dishes are medium spiced sauces with tomatoes, peppers and onions.

Ayurveda is an ancient Indian system of natural and holistic... END_OF_DOCUMENT_TOKEN_TO_BE_REPLACED

At this time of year, after all of the rich... END_OF_DOCUMENT_TOKEN_TO_BE_REPLACED

Our food is cooked to order, and delivered straight to your door.

We recommend booking a table for groups bigger than four people.

Find Us In
Clifton, Bristol